Some  names to keep in mind are:
Old Pali Carriage road -  built by the ancient Hawaiians as a foot path, dangerous, with some vertical rope climbs.  It was used to transport taro, rice, butter from Kailua to Honolulu.  In 1795, King Kamehameha defeated the O'ahu Hawaiians to consolidate his rule over all the islands. 400 warriers were forced off the mountain to their deaths at the  Pali (cliffs) Lookout.
Old Pali Road - essentially a gradual improvement of the Carriage Road, done over the course of a couple of hundered years, culminating in 1887 with major work done by blasting powder and dynamite.  Still, some of the grades were 49 degrees. The Old Pali Road was closed in the early 60s when the New Pali Road was finished.
New Pali Road - a highway with tunnels, completed in 1959, removing the incredible grades found on the old road. 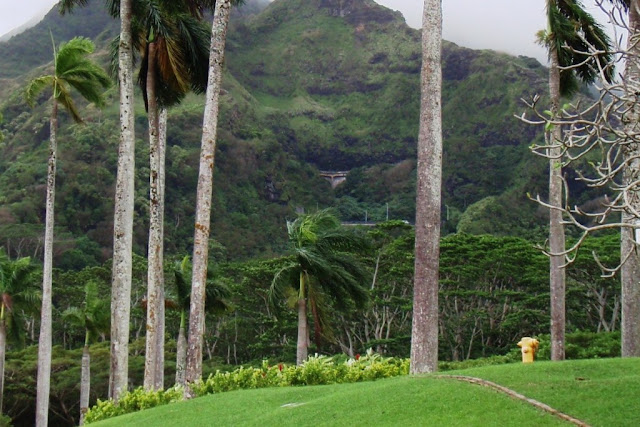 Here's what we're about to do, but we don't know it yet.  We plan to start our hike on the Old Pali Carriage Trail off the golf course/PresbyChurch parking lot, and go as far as we all want.  In reality, we went all the way up to the famous Pali Lookout which isn't even in this photo. What you see tucked into the mountain is the "new" Pali road and above it is a glimpse of the concrete side of the road we climbed as it approaches the Pali Lookout. 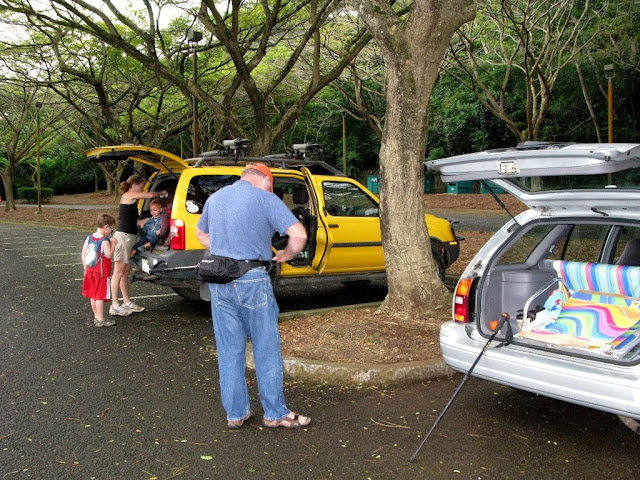 In the parking lot, we spray for skeeters, grab backpacks and trekking poles.  L to R is Sam, Alli spraying down 20-month old Ben, and Richard.  The Pali (means "cliffs") are legendary both in terms of history and beauty.  Every morning, islanders wake up to marvel at the Pali which change every day thanks to cloud formations, fog and shadows.  The Pali is the rim of the cindercone of the volcanos that erupted eons ago, and whiich surround Kailua. 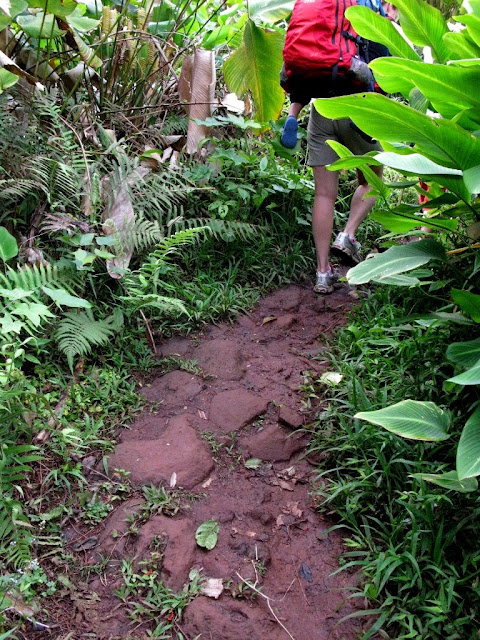 Ancient Hawaiians built this "road" with stones set in the never-ending mud so they could climb, on foot, over the Pali Mountains from Kailua to Honolulu, carrying their taro, butter and rice to market.  There were places on their trail which could only be traversed by a rope ladder.  Can you imagine?  We started this hike in awe of the daring and enterprising Hawaiians of long ago. 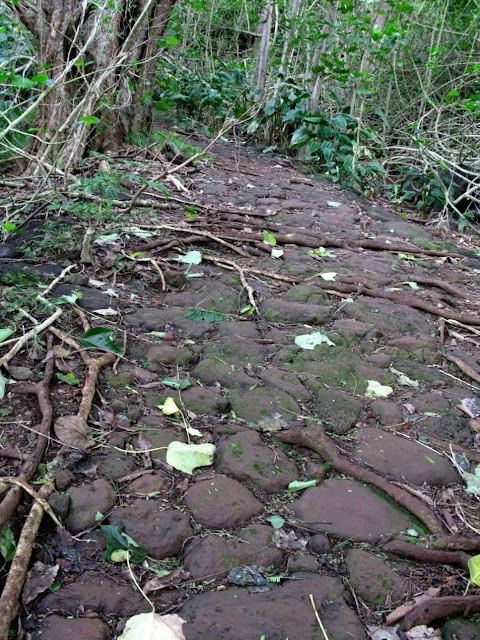 Transportation changed over time, from this being the footpath, to becoming a carriage road, though we can't imagine how carriage wheels went over this stuff, and at grades of up to 49 degrees! 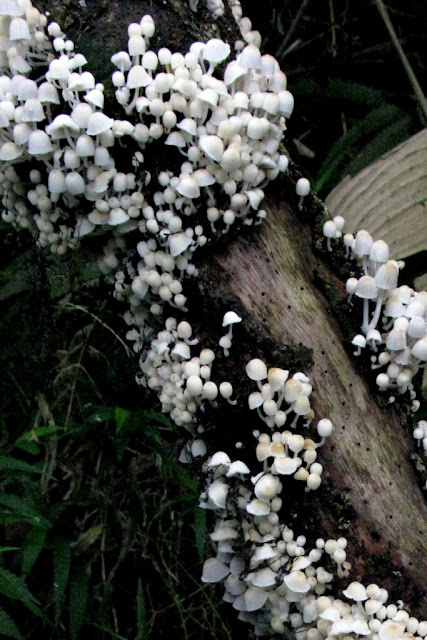 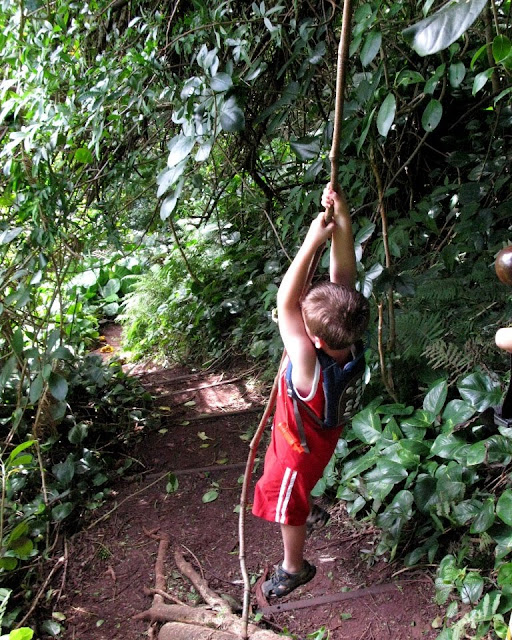 Vines to help us swing over some places that were a bit broad. 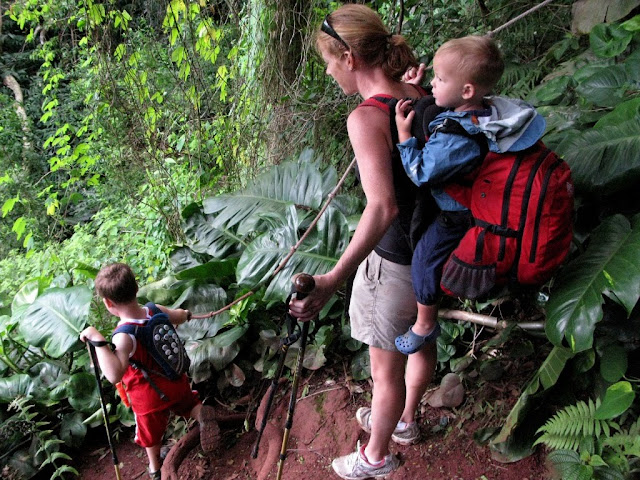 Team Krug.  That's about 60 lbs in that pack when you add up the water bladder, Ben, diapers, GPS, emergency kit, wipes, and food! 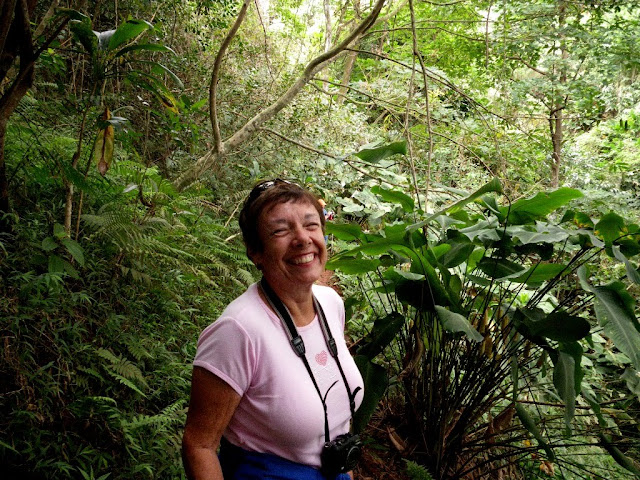 OK everyone, I'm still being nice, but I am not open to any more instruction on how to hike! 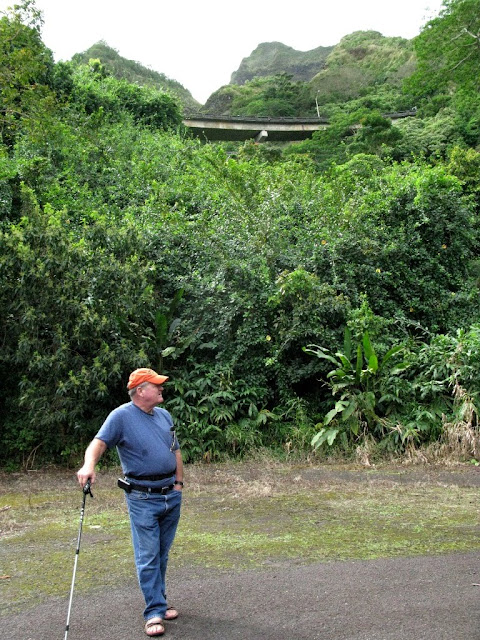 By now, we've made it through some muddy spots, and even found ropes with "stop-knots" in them which helped us down some slippery, steep twists.  Richard is at a 3-way fork on the part of the road which was greatly improved about 1919, called the Old Pali Road which is no longer in use. We're going to hike to the New Pali Road you see in the background, then crawl under it to rejoin the Oli Pali Road we're standing on now. We aren't quite sure (yet) where the other two forks go. 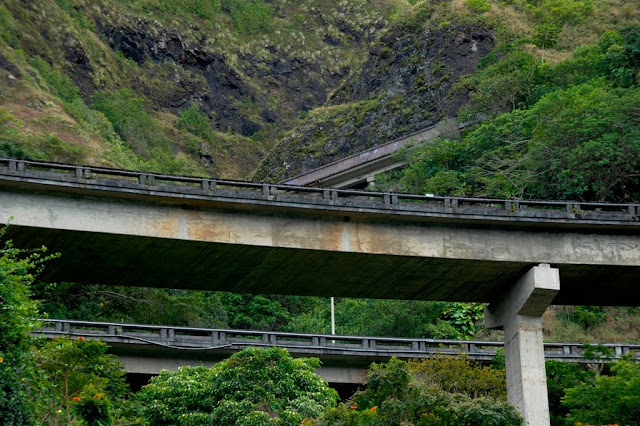 Here's a great shot (thx Richard) of the in-bound and out-bound New Pali Road, and above it, a section of the steeply pitched Old Pali Road (49-degree grade in some places) which was used until 1959 when the tunnels were finished for the New Pali Road.  We hiked up that steep one to the Pali Lookout. 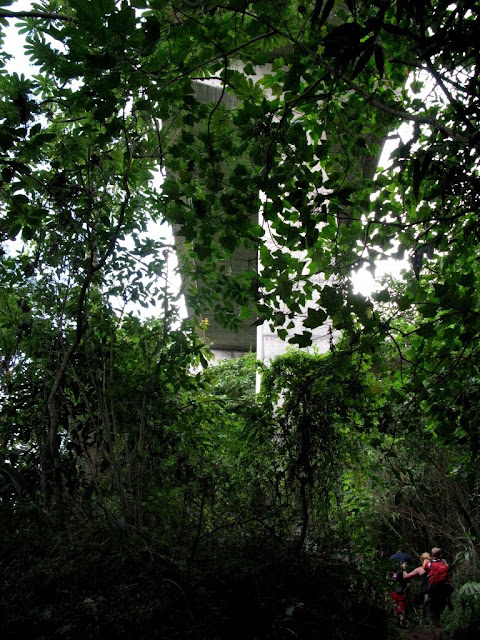 For a short section of the hike, the new Pali Highway is overhead. 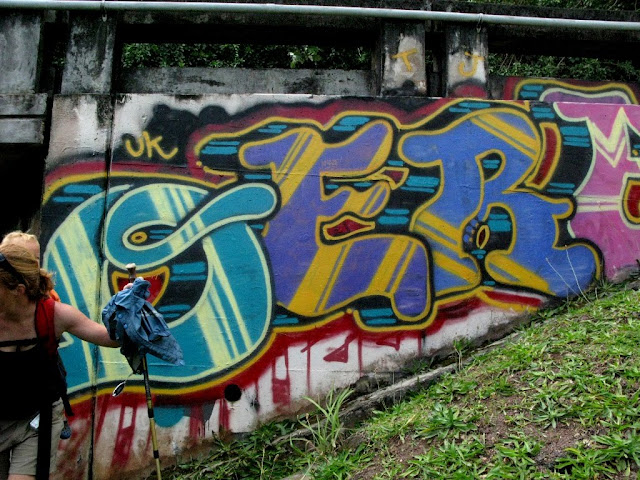 We're about to squeeze through some tight places under the highway here, but we stop to admire the graffiti.  I like it, actually.  I didn't take any pictures of the squeeze and shimmy we did here.  Frankly, I was preoccupied with making sure I'd get Ben's legs squeezed enough to fit through some places, and whether we'd get Alli (because of the backpack) and me (because I'm not so nimble) up makeshift old rickety stairs which had some cable (photo below) anchored from the top, so we could pull ourselves up.  Nice hikers around here -- they leave "aids" for those that follow them. 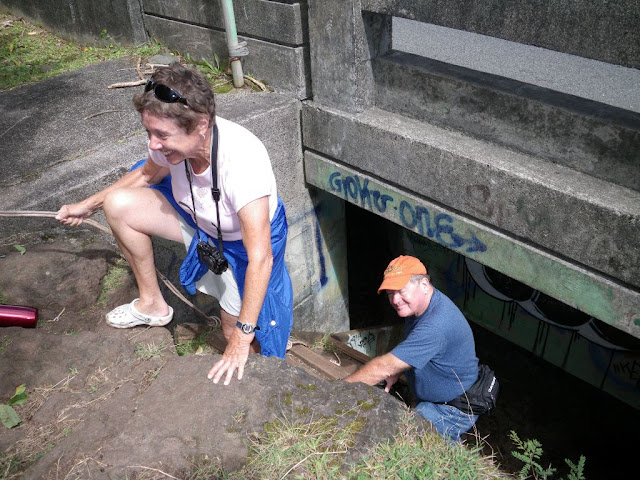 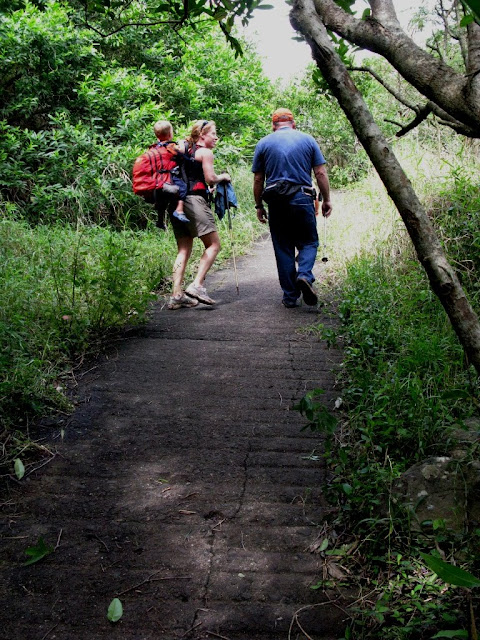 We all made it without mishap, to this part of the Old Pali Road with grooves which helped those old cars get up the steep grades.  This road was in use until the 1960s, with it's 49 degree grade in some places!  In the picture above, Richard is affirming that we are sturdy enough to go the whole way to the Pali Lookout. 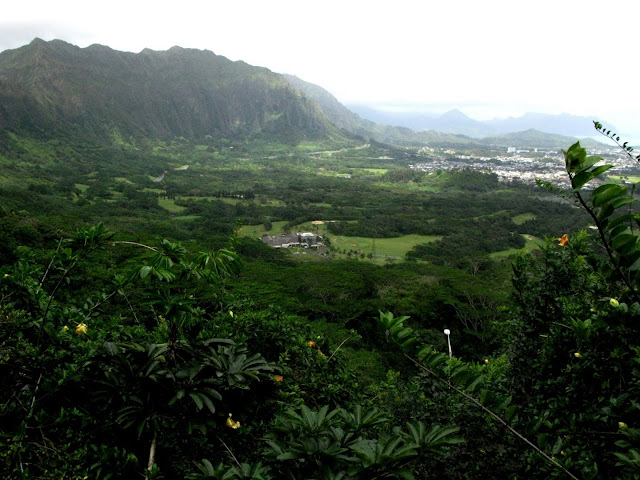 DID IT!  That large green area in the center was our starting point.  The wind was horrendous -- probably over 60 mph.  There are myriad stories of the wind up here, including horses that were blown off in the 1800s, but we have our own stories stornow.  It knocked Sam down just before he could reach the lookout!  I wanted to try to get there, but should have gotten a clue when I saw some people taking pictures of ME trying to get up there.  The wind got my sunglasses as I grabbed for a wall to hold on to!  Richard made a vain attempt to look for the sunglasses, but had to abandon that crazy idea. 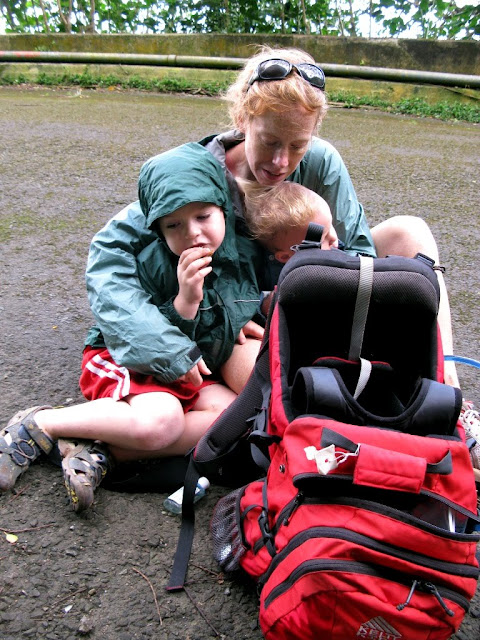 Huddled up for snacks and the 3-mile descent to the car. 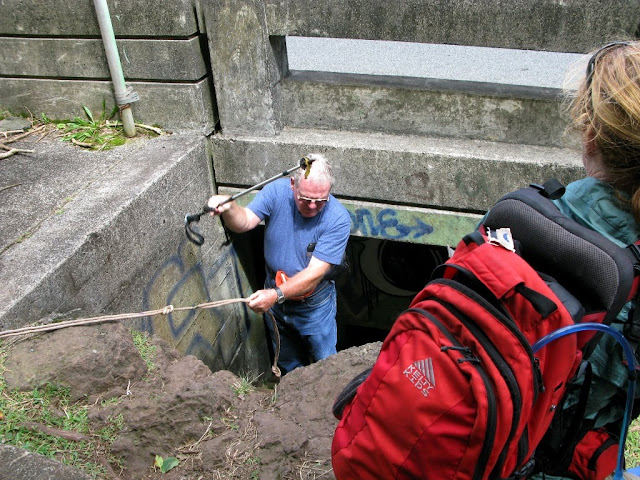 A bit tricky again, getting back under the highway with all our gear.  Ben's not in the backpack -- in fact, he walked all three miles back to the car!!! 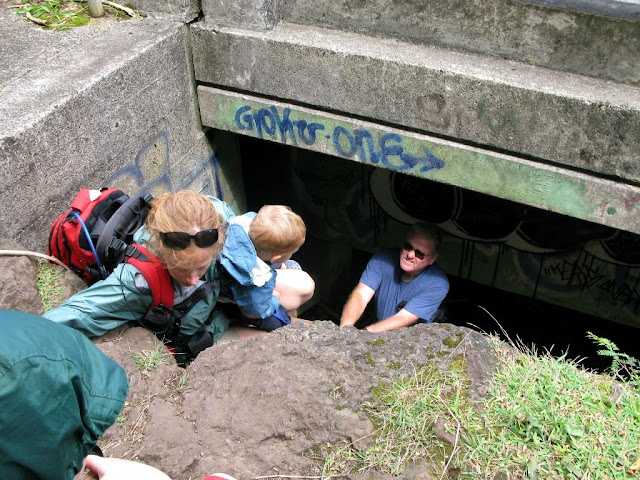 Hanging on while getting her footing. 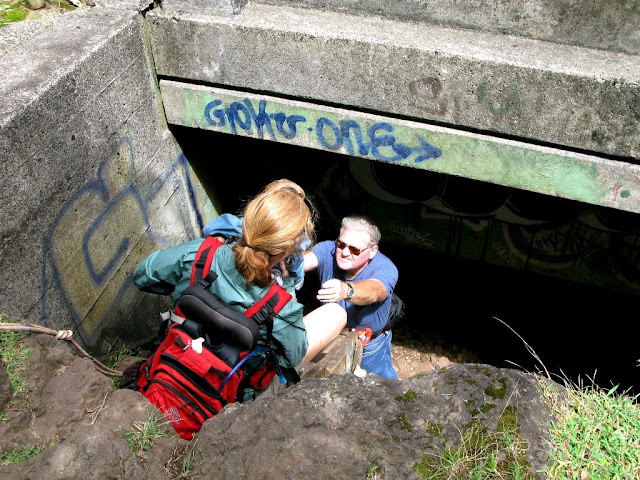 Don't get too wiped, Richard!  There's still Sam and Gramma to go! 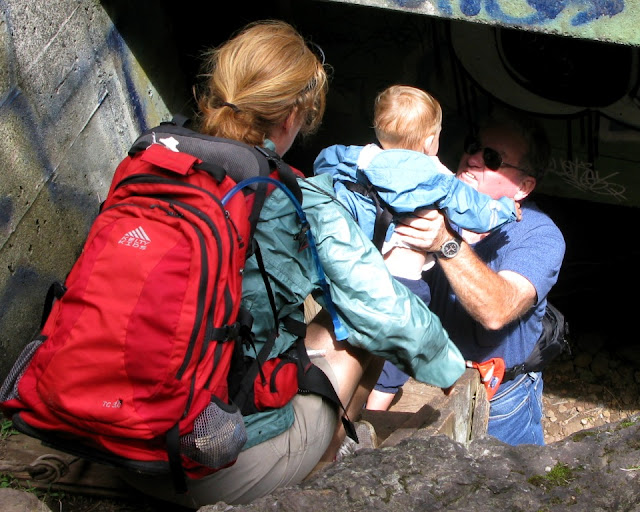 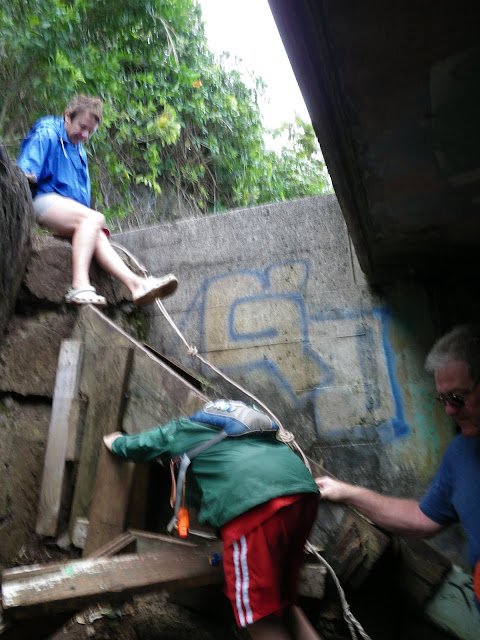 The last two coming down -- Sam and Gramma 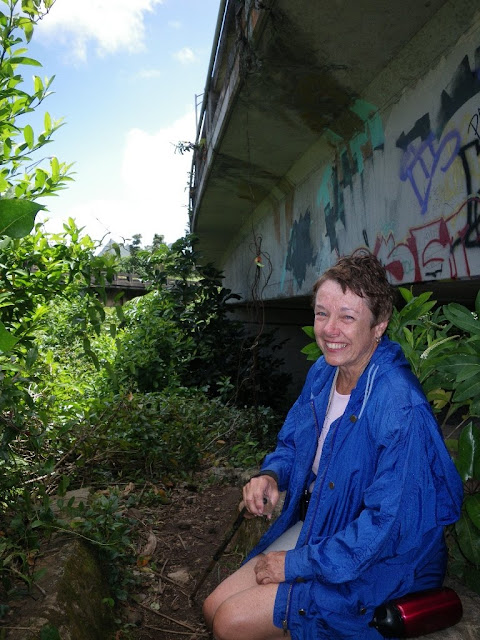 Breaktime under the New Pali will be followed by the hike back to the car, but with a little uphill side trip to Likeke Falls.  Likeke is the Hawaiian word for Richard, the one who developed the trail. 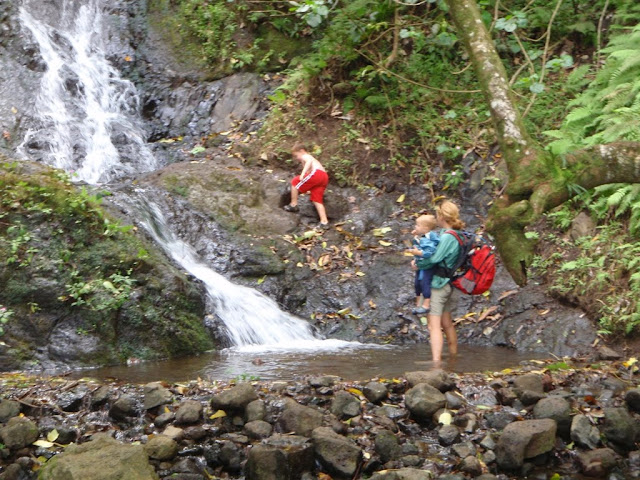 Arrival at Likeke Falls and the sport of rock sliding into the pond below. 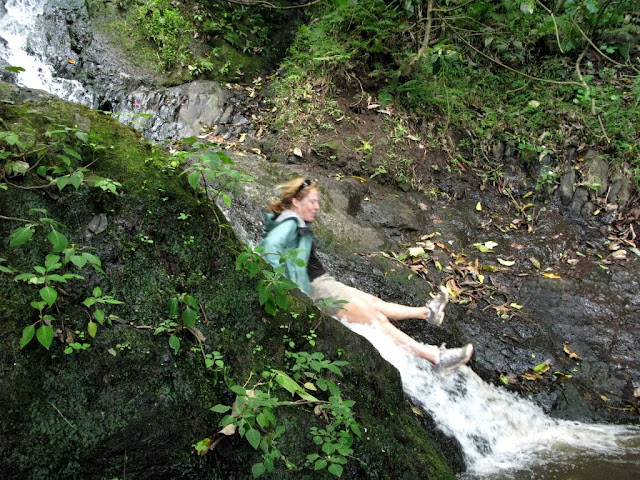 Alli and Sam both star in this event. 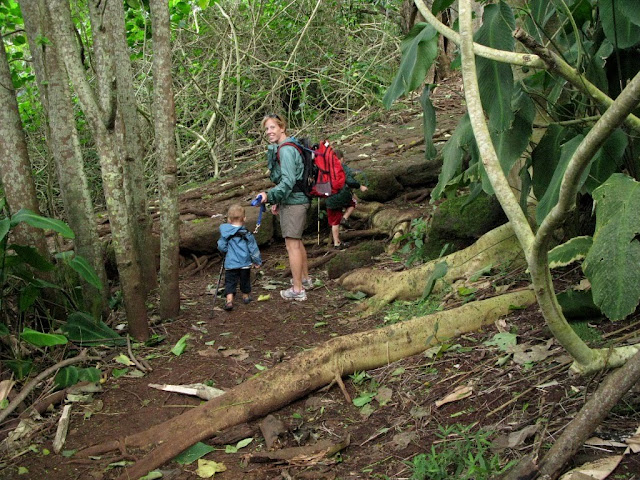