SUPing﻿
7 a.m. was the take-off time for long-boarding and SUPing (stand-up paddleboarding).  Doug and I took off . . . he with Alli's equipment, and I with my camera. 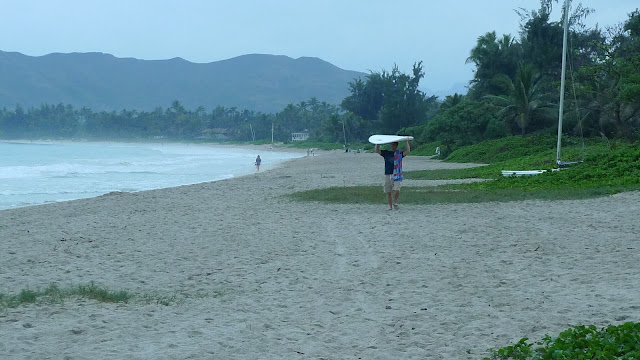 A trot across Kalama Beach Park and down the beach a bit.  The sun is just barely up and is behind cloud cover. 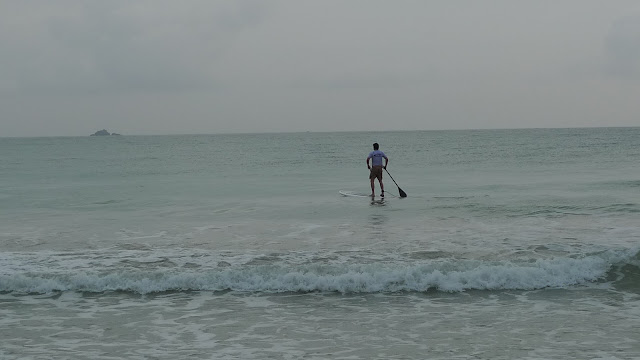 Doug is quite at home on the board, but the waves here are small and short-lived.  Nevertheless, he had a few rides each lasting about 10 seconds, the most you can expect in Kailua this time of year.
Koko Crater Hike
As if this wasn't enough, it was quickly followed by a strenuous hike up Koko Crater, earning bragging rights for many!  Having earned those rights in April, I opted for Richard and me to play with Ben (who has done 800 of the steps at Koko Crater on his own!), allowing Alli to have a bit more time with her brother and his wife.  Take a look at the photos on Alli's site at
http://www.kampkrug.com/2010/12/29/happy-hikers-2/   where you should be sure to click on the photo.  It will take you to a series of hiker photos! 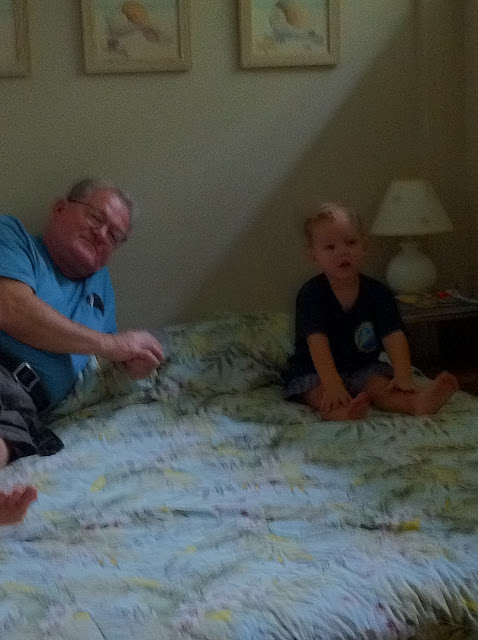 and a snack moment.  Ben wasn't a bit surprised that we'd have the same gizmo at our house, with the big "M" on it, that he has at his house. 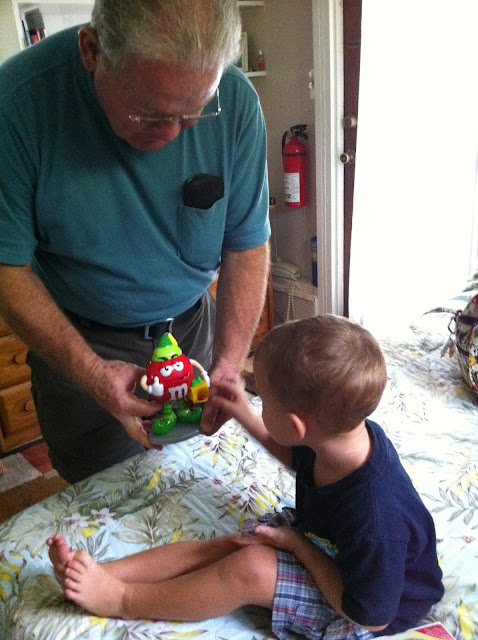 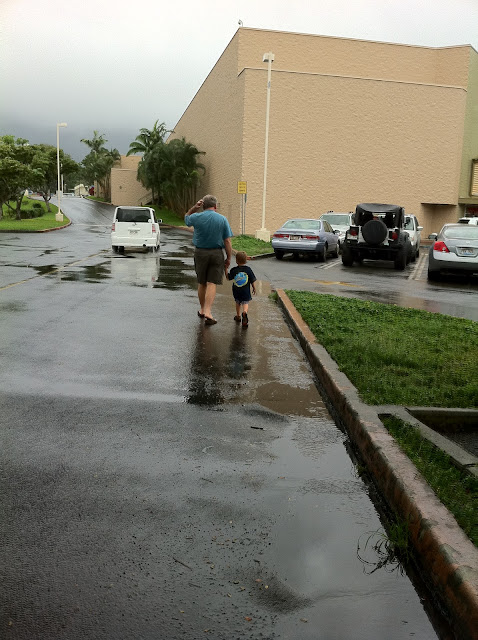 We hold "paws" in parking lots. 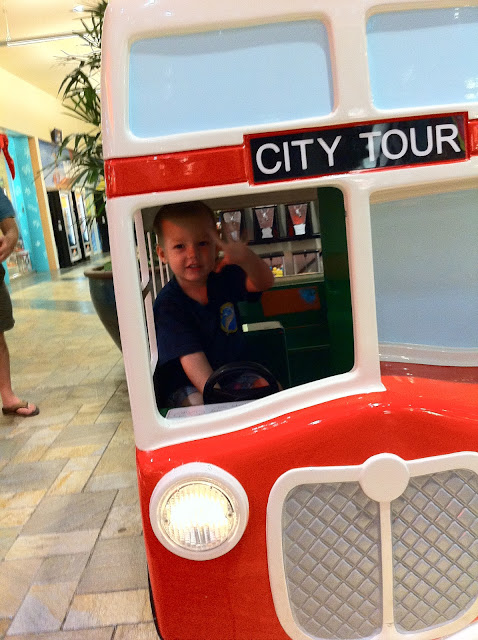 The winner, in terms of time spent, was the Tour Bus.  Next, the Ice Cream truck.  He waved bye-bye to us probably 30 times, always saying, "Bye-bye gwamma" or "bye-bye Wichud".  Who had more fun?  That's a tough one! 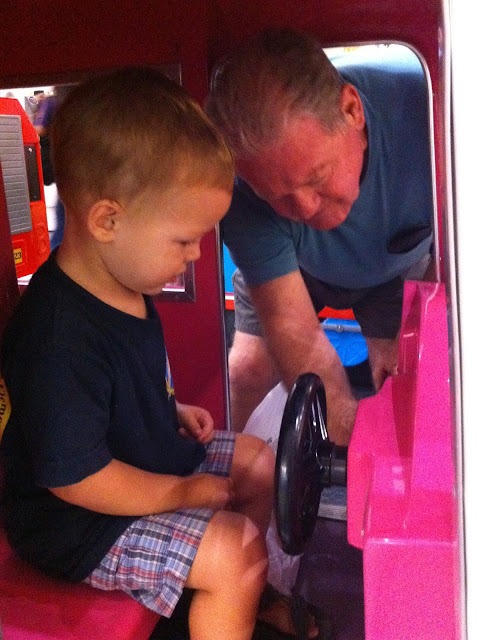 Richard's heart won out -- he put money in the slot to make the Tour Bus bounce around a bit.  Or so he thought.  It was tight quarters in there and he couldn't see the slot.  Ben is looking on, probably knowing Richard was putting the money in the "coin return" slot!  Ben wanted to put the last quarter in, and put it in the upper slot.  With that, Richard saw what was going on, and put the previous 3 coins in their proper slot! 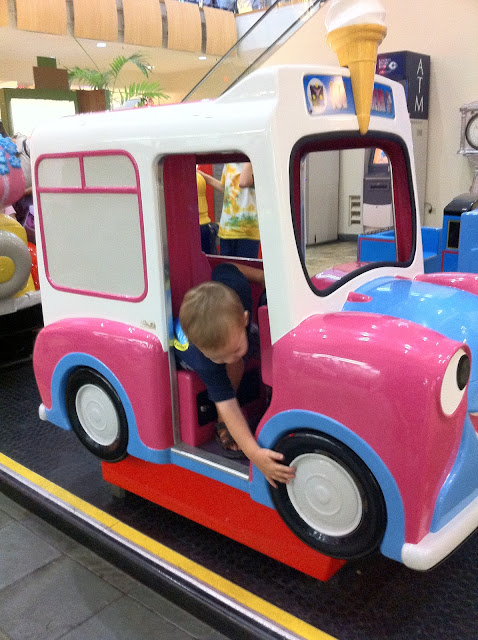 A tire check was in order, of course.  It was the offer of lunch that lured Ben away from this truck, and following that, we took the typical grand-parent detour into the toy store!  A great day all around for everyone.
Posted by Oli at 1:54 AM No comments: 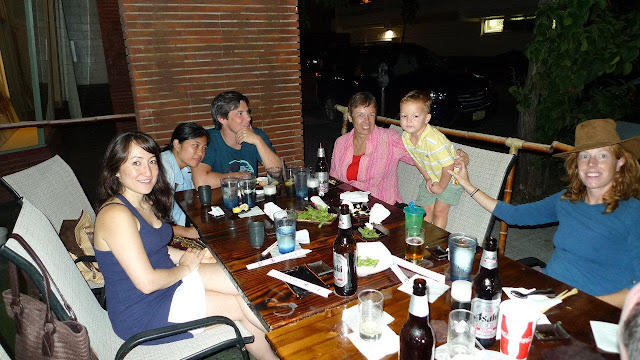 The whole tribe doesn't fit in this picture, but you get the idea!
I still think it's wonderful to sit outside for dinner . . . in the winter . . . without even those overhead gas heaters!  We give thanks to our special Santa for this nice dinner.
Posted by Oli at 6:29 PM No comments:

The Fontamillas Family begins to arrive on December 22, with Doug and Mary as the first arrivals.  On December 23, all but two more arrive, a cause for celebrating at Dave and Alli's for ziti dinner! 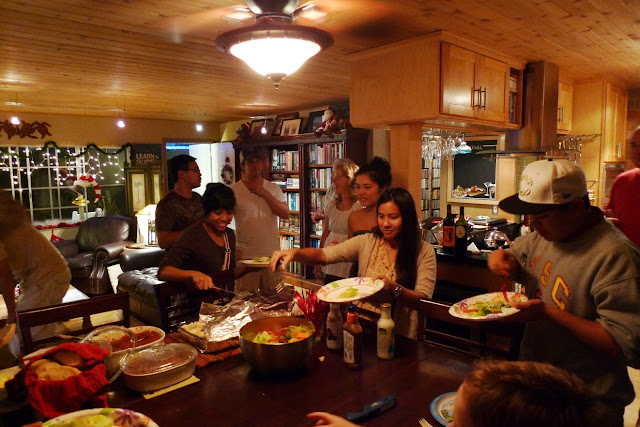 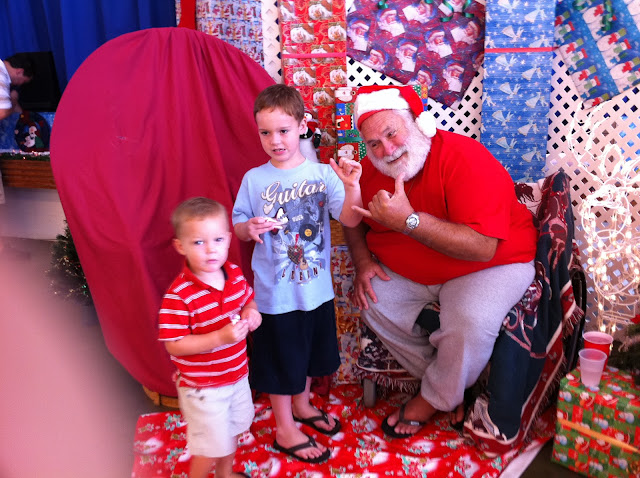 When Santa arrives in Hawaii, he changes into something more comfortable!  He's seen here with Ben, 2 1/2 and Sam, almost 6
Posted by Oli at 1:47 AM No comments: 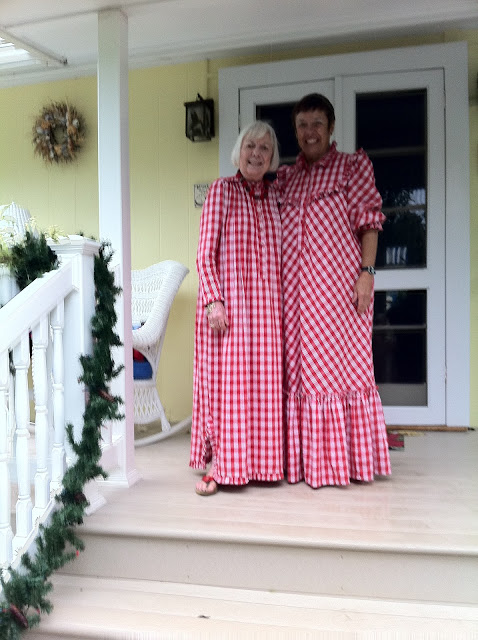 Suzie and I left from her cottage home to the tune of raindrops, to enjoy the annual Christmas Home Tour which I look forward to each year.  It never disappoints!  For a few hours, I dream of living in a gorgeous Hawaii beachfront home!  I soak up memories (and photos) of the elegant decorations, some elaborate and some delightfully simple.  We end the tour with a nice lunch at Buzz's - a very well-known island restaurant across from our Kailua beach.
We're wearing easily kicked-off "slippahs" (flip-flops) since standard protocol in Hawaii is to leave shoes outside.  I'm so used to it after all these years, it's automatic.
About that plaid (Doug wondered where I got that tablecloth made into a mu'u mu'u!):
It's called Palaka.  Shirts made of palaka were worn by the 19th Century plantation workers and is a well-recognized fabric here.  Suzie had her mu'u mu'u made some years ago, and I had mine made about a year ago.  I love it!  We received many compliments! 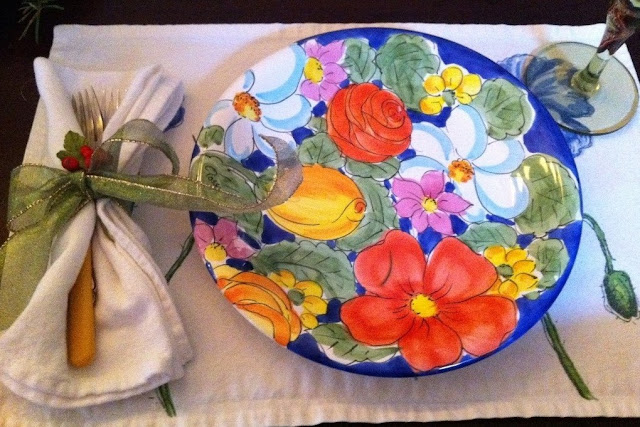 Many beautiful place settings were displayed. 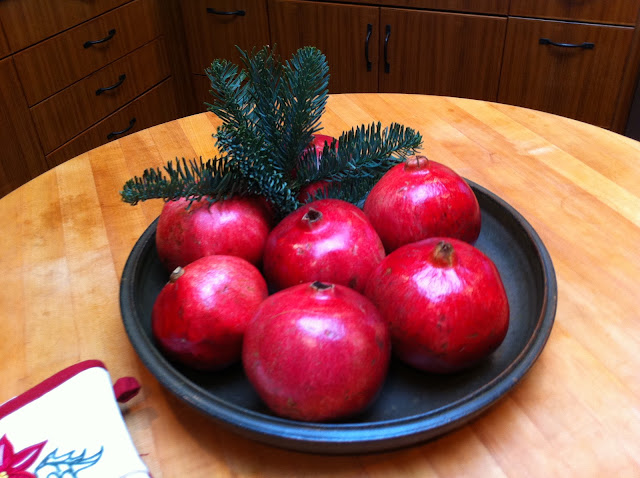 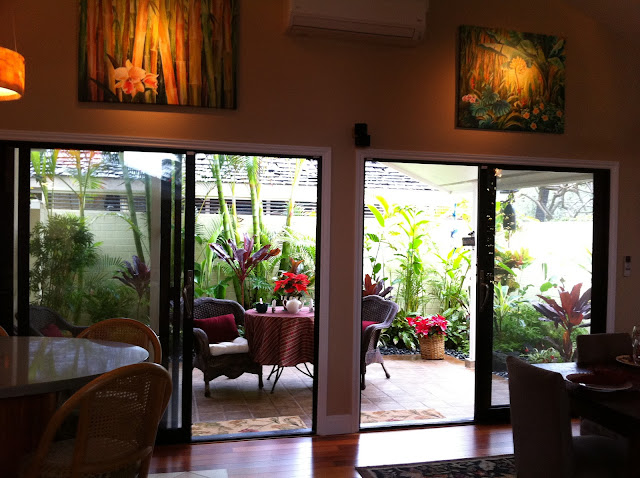 Distinguishing inside from outside in Hawaii is difficult.  Some people don't even use inside space for an eating area because we can ALWAYS eat outside.  An electric awning is all you need if it rains.  You know, of course, that people here don't own heaters right? 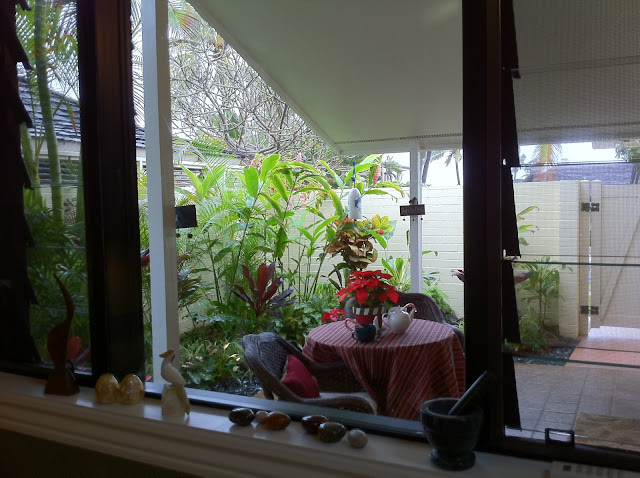 Looking out from a kitchen 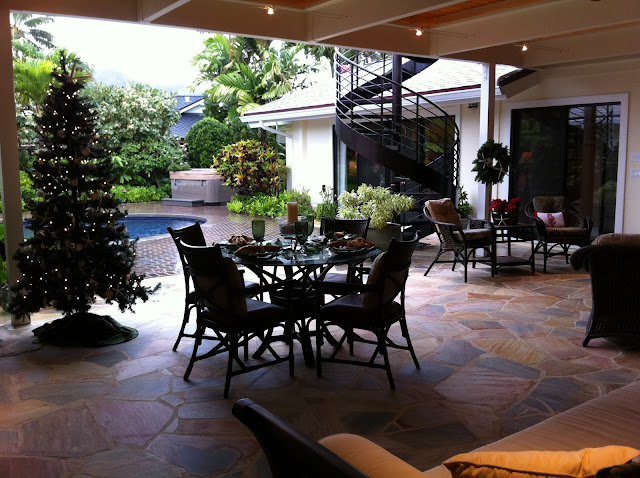 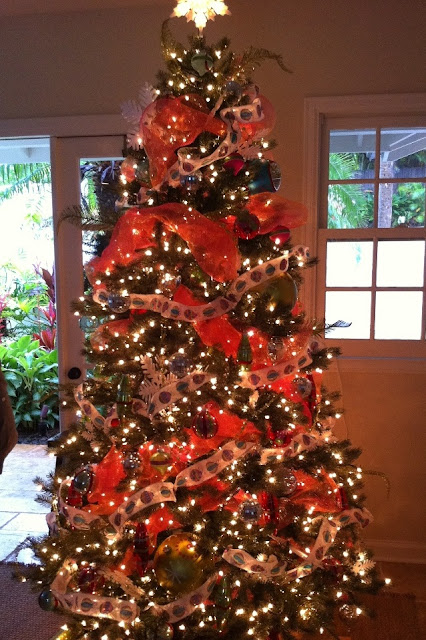 MELE KALIKIMAKA AND HAU'OLI MAKAHIKI HOU
Posted by Oli at 11:50 PM No comments: