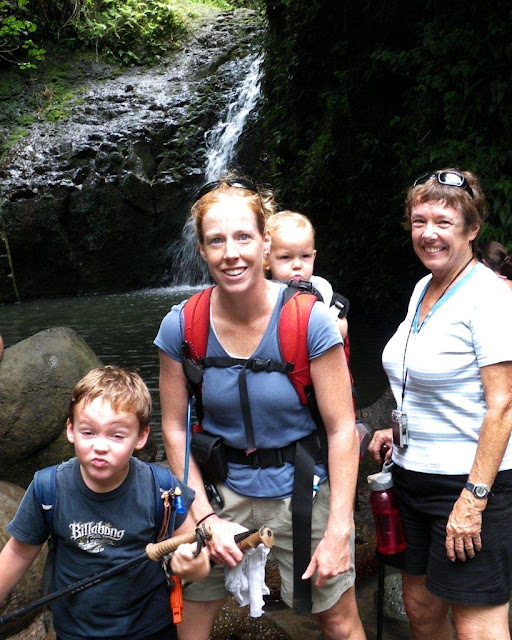 An incredibly gorgeous hike which terminates at breathtaking falls, and exits through sloppy slip, slide and plop into mud.  A wonderful day.
This is THE BEST-est hike in the universe! 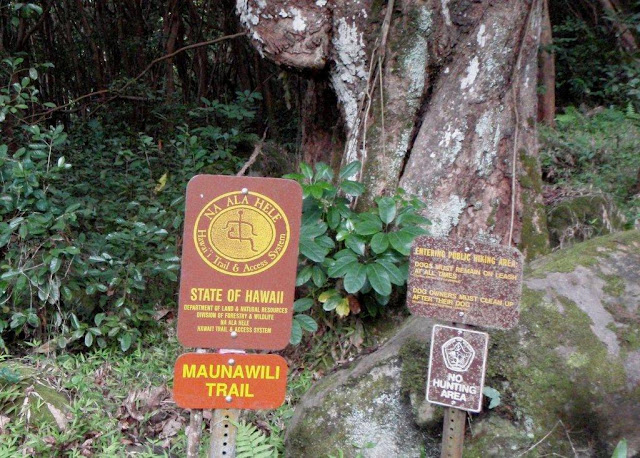 "No Hunting Area" which is comforting, because wild pigs abound on O'ahu.  Well, now I'm not sure who I'd rather meet -- a hunter or a wild pig! 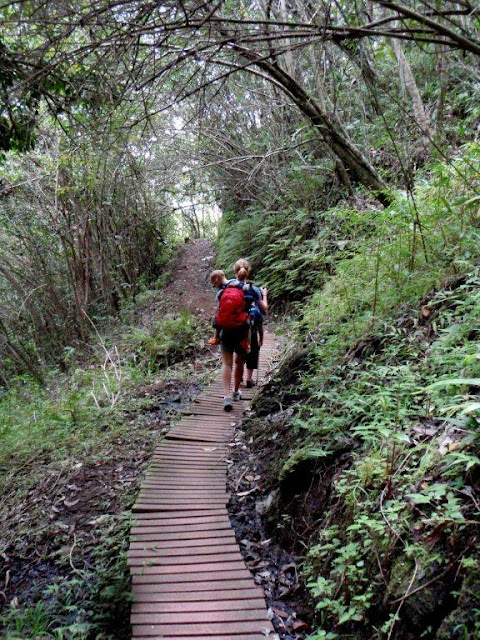 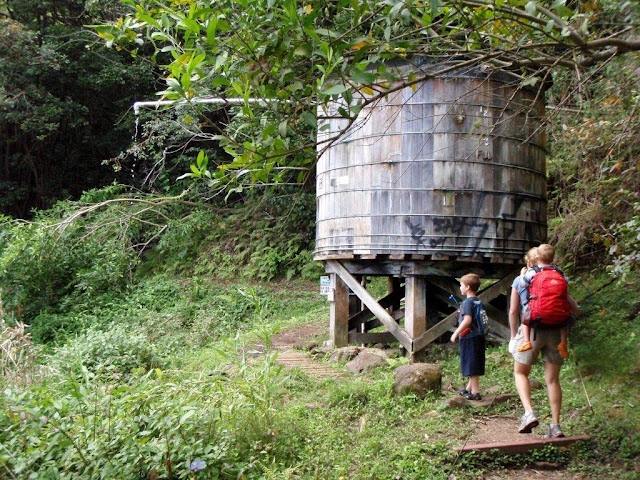 Marker #1 -- everyone cites this water tower as being on the trail.  Funny little pipe sticking out there and dribbling. 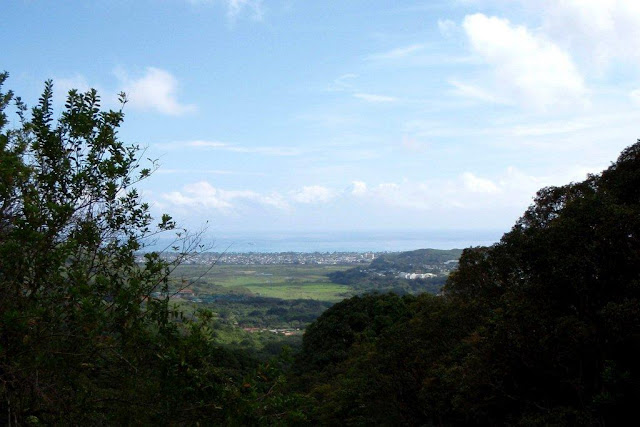 Picture-worthy views at every turn. 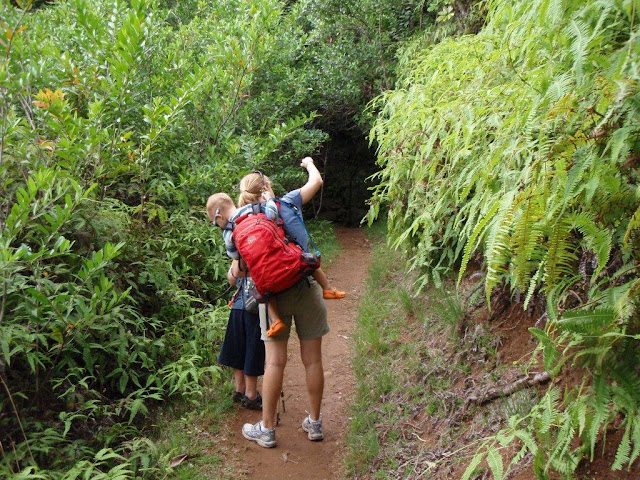 3 miles of lush greenery.  Alli is taking a picture, and I'm entranced by how dark it is under the cover coming up.  The "woods" are dense and peaceful. 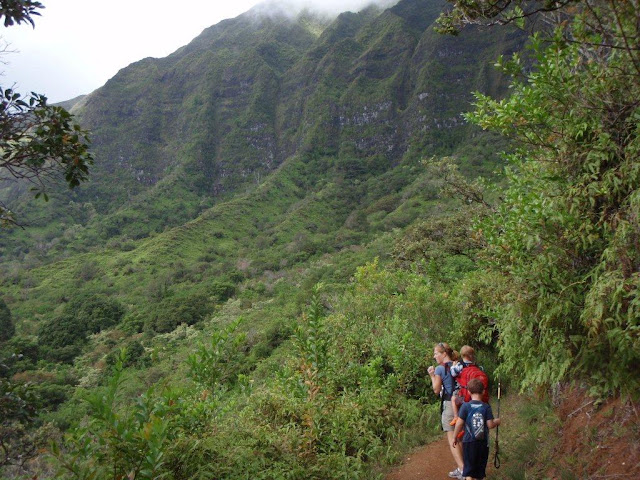 Doesn't this make you want to be here? 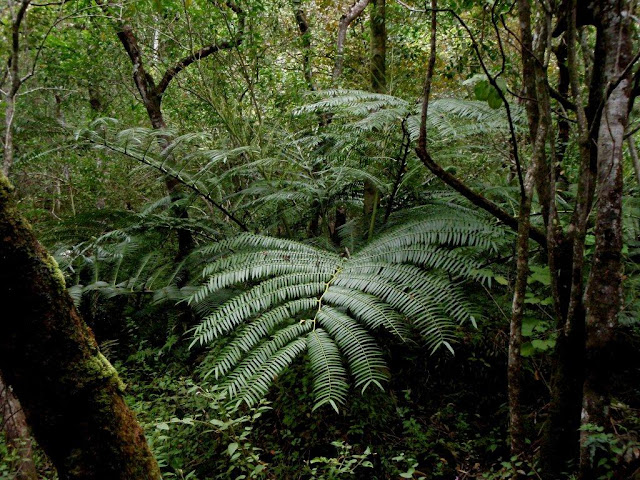 The biggest fern I've ever seen. 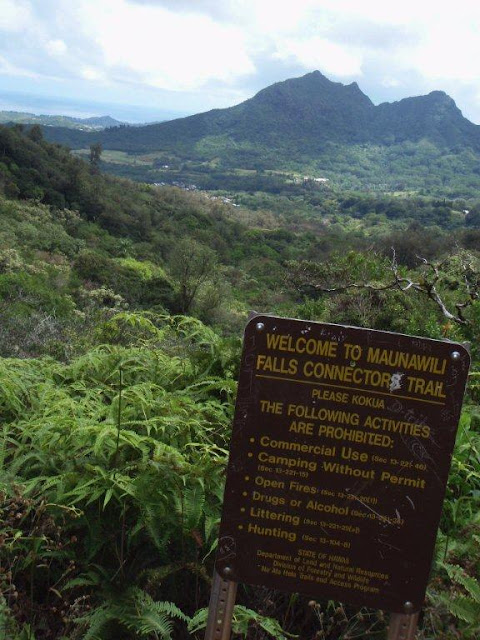 3 miles in, and time for pow-wow.  Go down this trail to the falls where Richard will come pick us up, or backtrack to the car?  Sam votes to go to the falls.  Alli votes the same.  I vote for going ahead, too, since we THINK it's a tiny bit shorter than backtracking. 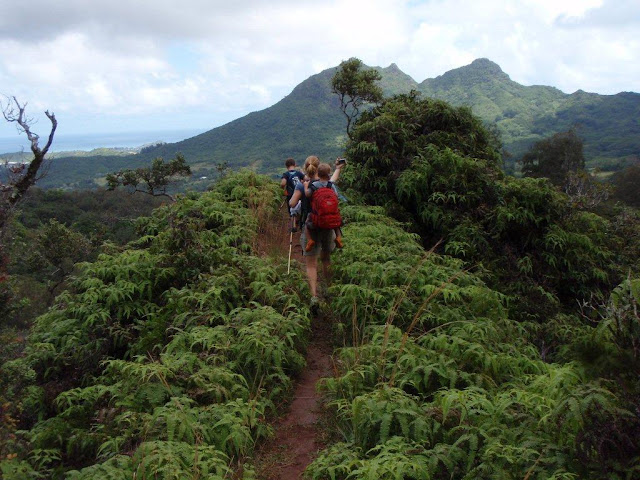 Out on a ridge now, and going downhill.  It starts to rain which slicks up the mud in no time.  I'm thinking I'm too old to be making these "pow wow" decisions anymore.  I thinking I need my head examined, but Alli says to Sam -- "it's ok, we're on the outside edge of the cloud."  She's a soothsayer!!  If I keep my trap shut, I'll never reveal that sometimes I wonder if I'll get out alive.  :)  OK, that's an exaggeration. 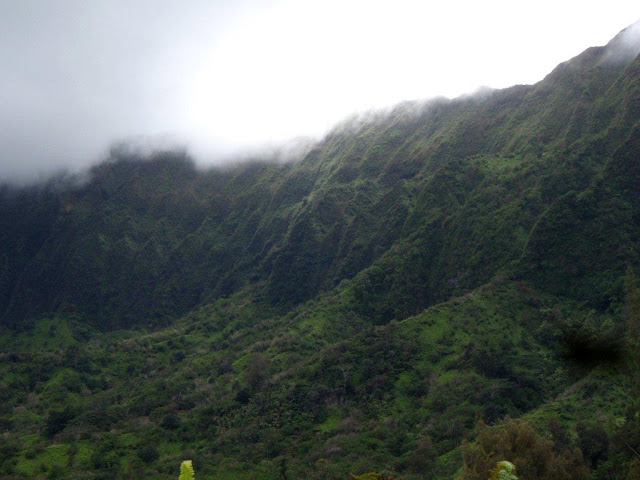 See those vertical ridges?  The Demo Trail has been fairly level, and winding around them, but now we're going down one of them.  By the way, Alli was right -- in a few minutes, the rain stopped leaving just a little "mudslick". 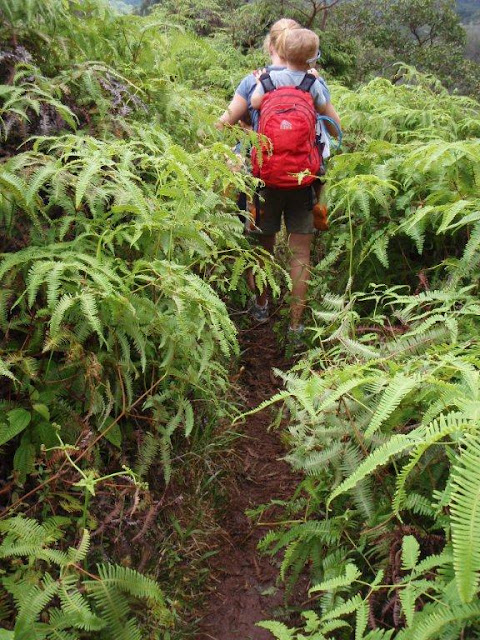 Tall ferns, clouds hugging the tops of the Ko'olau Mountains. 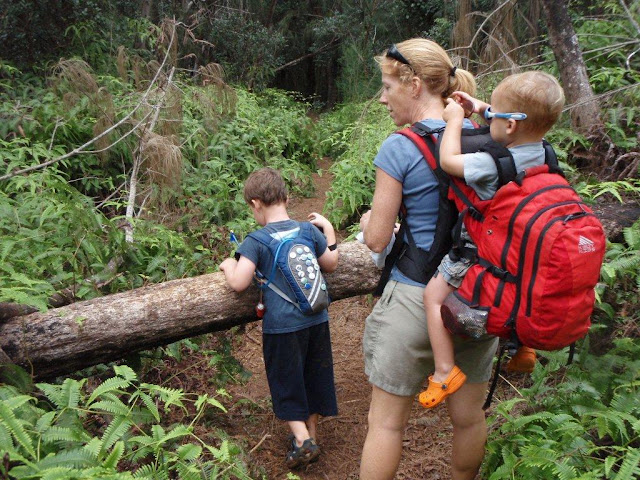 After this minor obstacle, there's a gap in my pictures.  We were all failry consumed with getting down some steep, uneven stairs to the falls which were darn slippery with mud. 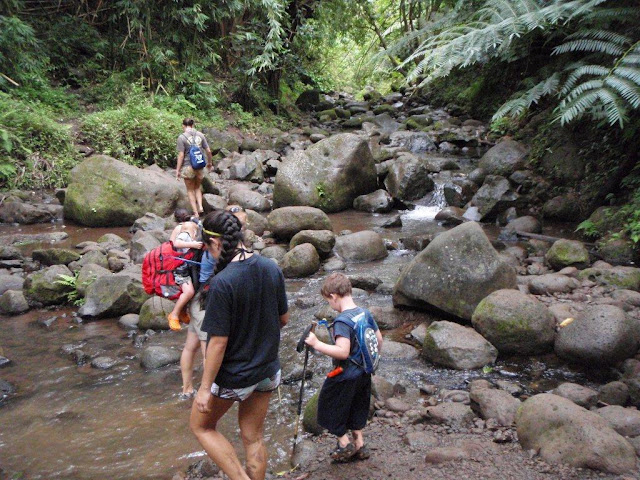 Almost to the falls now.  Just maybe tenth of a mile scramble over rocks and boulders, with Ben still in Alli's backpack . . . a load of 60 lbs!  Sam's shoes are beginning to tell the rest of the story. 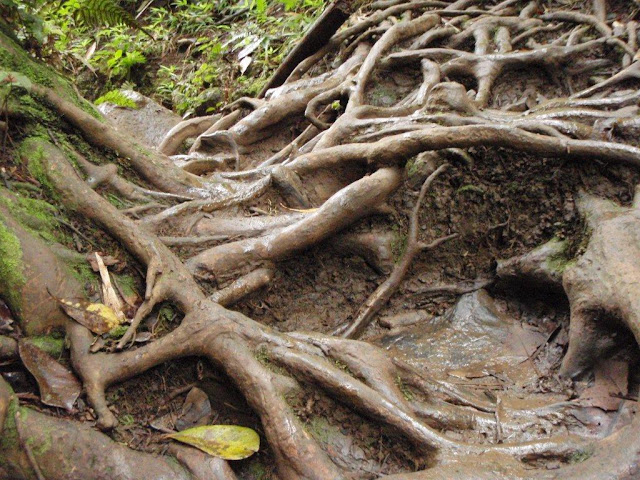 These roots were the best way to scramble up to the trail which led to more rock/water scramble and then . . . The Maunawili Falls!  Roots can be like ladders -- you grab with your hands and pull yourself up while placing feet into opportune cross-roots.  Here's where you give up the two last clean things you might still have -- your hands. 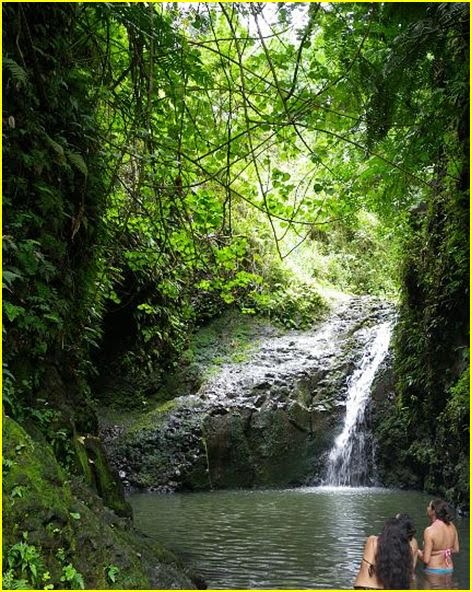 There is no doubt about it -- this is a piece of Heaven.  Kids swim here, and the bigger ones make astounding jumps from 35-40 feet up the cliff.  They explained that you have to enter the water like a pencil; anything sticking out, like an arm or hand, will hit so hard it will really sting and turn red from the smack.  They were having a blast! 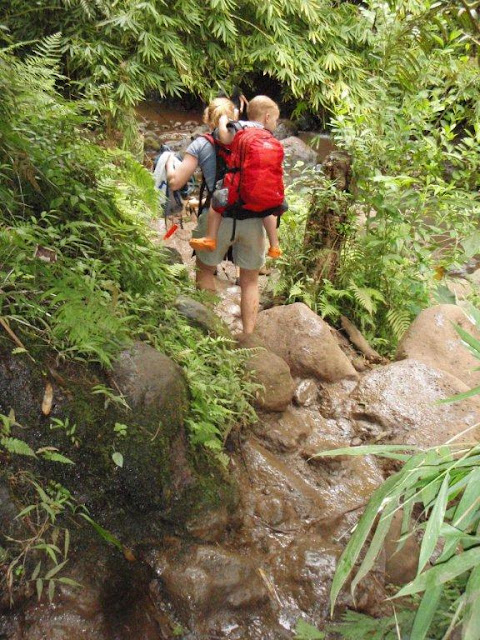 After about a half hour, it's time to reverse the scramble, and yes, we need to climb those 30 or 40 uneven stairs, but it's a whole lot easier going UP than going DOWN!  About now, on a hike, I'm thankful for the small treats!  :) 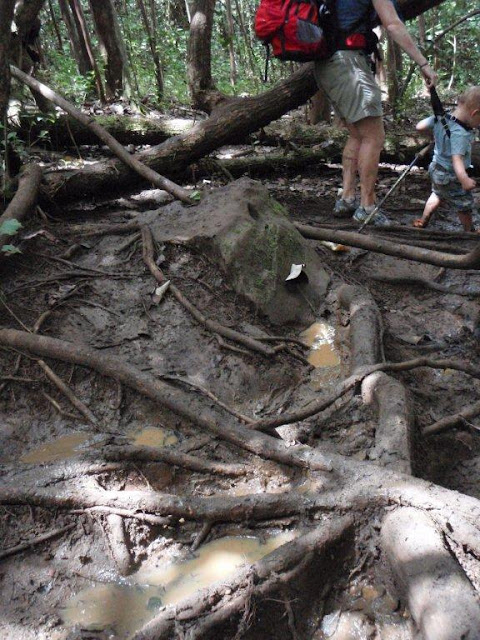 Oh boy, do we have some challenges (and fun) ahead.  The ENTIRE way out is a mud and root trap!  Ben is out of the pack after a slither that tossed Alli came close to having Ben's head hit a rock.  There is zero sure footing now.  Zero.  Every footfall is a gamble as to which way that foot is going -- slightly left, slightly right, deeper, backward, what? Thank goodness for our trekking poles!   We go very, very slowly, but Sam is having the gratest time.  He sticks his trekking pole deep into the muckw which sucks it in, and with both hands and all his power, yanks it out again only to be tossed into the muddy splash on his rumpus.  Alli's running a bit short on patience now, and wants Sam to "pay attention", but frankly, I think Sam has the idea that his mom is pretty challenged at this point, and probably won't come "running" back to get him! 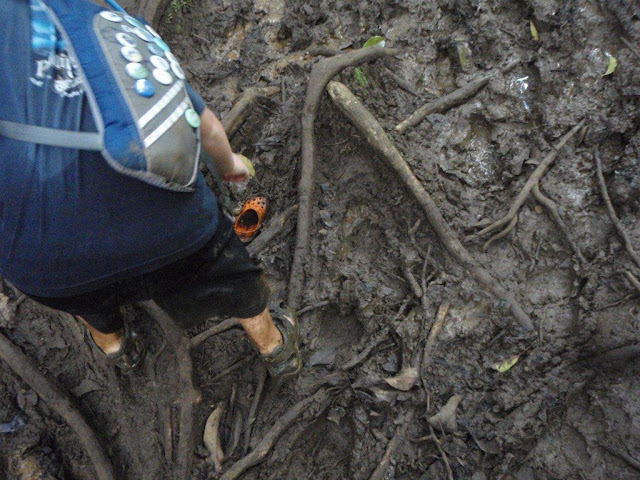 The mud has now sucked off both Ben's Crocs, but Sam is "to the rescue" to haul one of them out of this mucky slurp.  We have to cross the stream several times, and each time I think, "Oh good, we can clean up a little", which we do, but there's always more muck ahead.  After one stream crossing, we nearly lost our way, but asked some air-headed girls where they'd come FROM as they were entering our wonderful world.  Turns out, they were following US!  We did get ourselves straightened out, and the closer we got to the trailhead, the cleaner the incoming kids were. 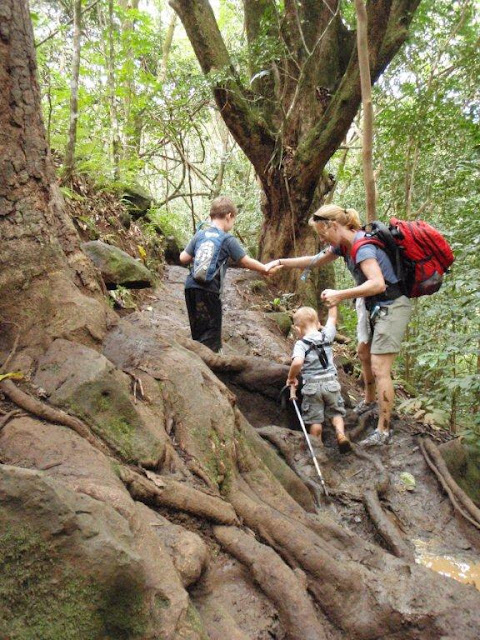 It's about time to totally laugh now. One cute girl coming in already has mud covering the entire front of her legs which are right about Sam's eye height, and his eyes "bugged" and out came a totally hysterically long "oooooooooohhhh".  Everyone around us started laughing, including one girl who was just standing still for a short break, but guess what?  PLOP -- down she went , with her dainty "oooops!"providing for more laughter for all to fill the valley. 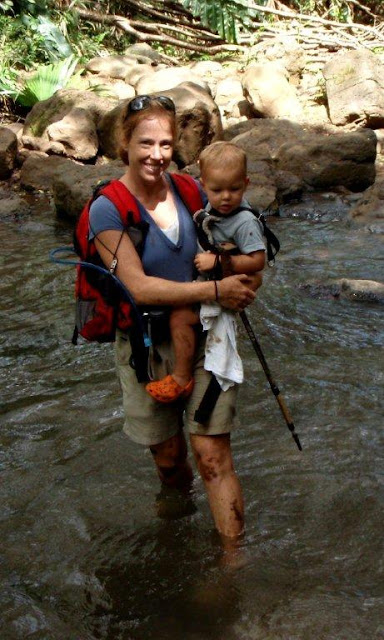 Here's my trooper daughter -- smilin' through, even after carrying Ben in her left arm for probably a half or 3/4 hour.  I don't know how she got her arm to straighten out after that. 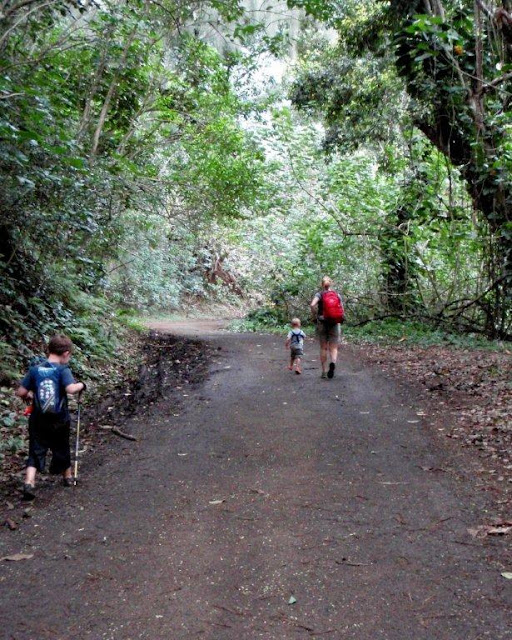 Oh boy!  Movin' out now!  Look at Ben's stride!  This is the paved road down to the residential area where Richard is waiting for us.  How lucky can we be? 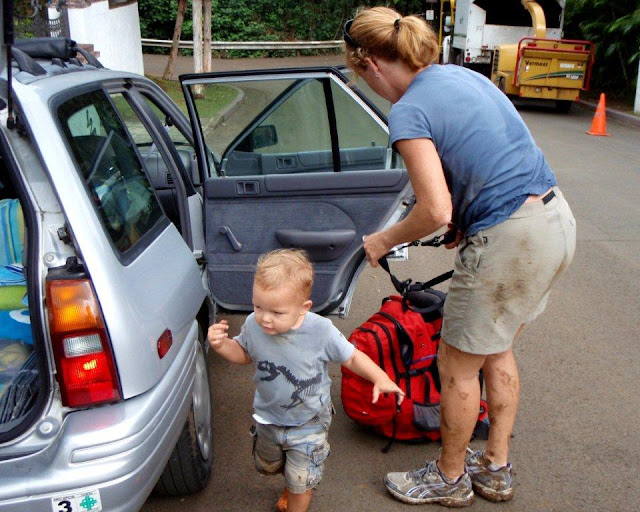 Sam was so filthy I wrapped him in a beach towel before he got into the car.  Richard offered to take Alli and the boys home so she could clean them up and get Ben down for a late nap while we went back to get her car from the Pali Lookout, which seemed sooooo long ago!  Need I say it?  We all had a wonderful time, would not have wanted to miss this, and can talk story!
Posted by Oli at 7:03 PM