When Richard heard Alli didn't know much about today's hike, but that it was up a ridge, he knew all he needed to know to stay home and play. He likes the gentle, rolling hikes where stopping to take pictures is a must.  I like that, too, sometimes.  But mostly, I like a little challenge that's "pretty." 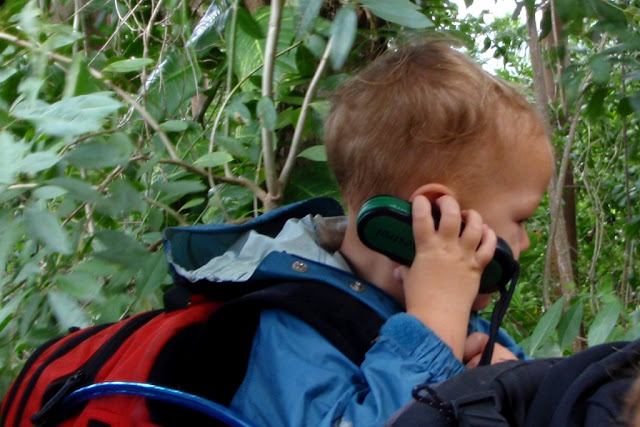 This little comic turned my anemometer into a cell phone as soon as he talked me out of it! 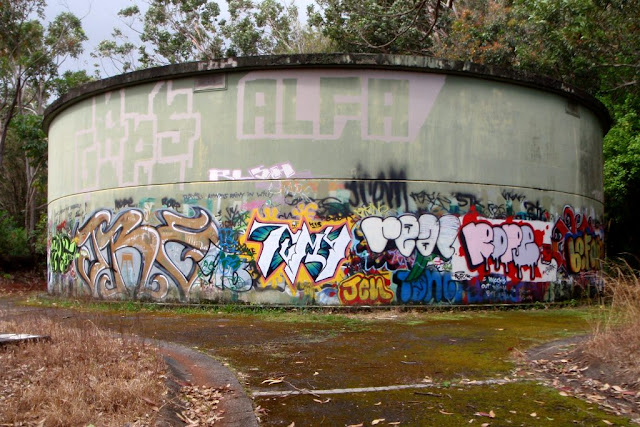 Access to the trail is at a well-marked "Do Not Enter" sign posted by the water company, as usual.  The décor is quite nice, I think. 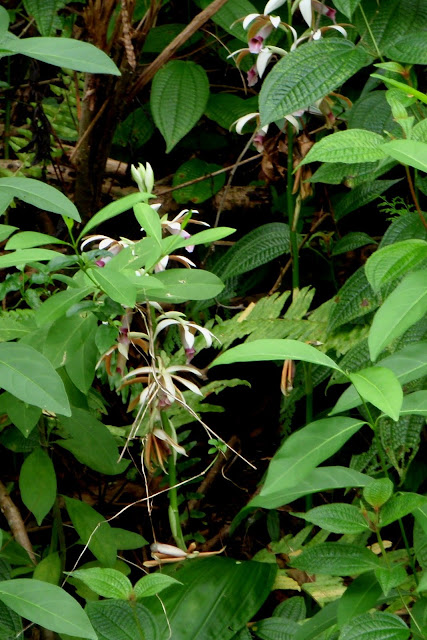 It was a hefty grade going up, marked with wild orchids and nice views, but obstructed by power lines. 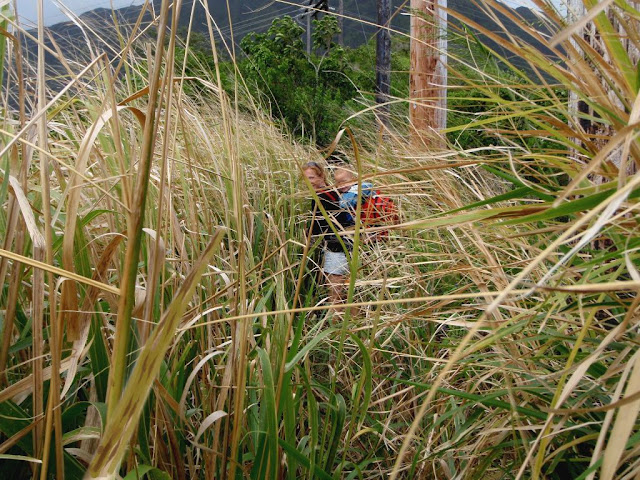 The tall grass was beautiful, and a tad difficult to see our footing. 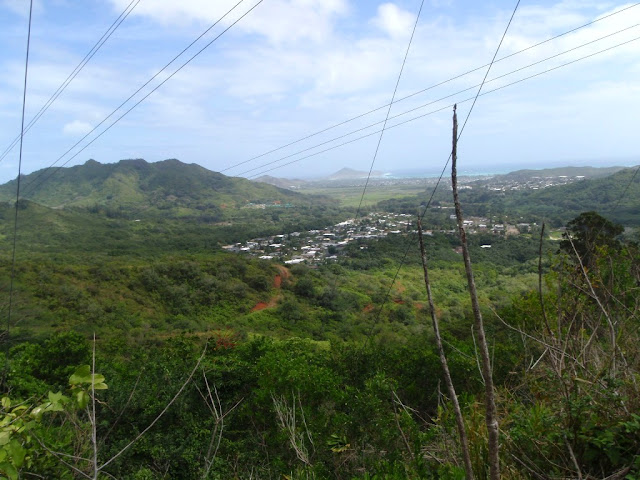 Looks like a little vog today (volcano fog coming from the Big Island).  See all the power wires?  Wish we could have wireless tranmission lines!  :) 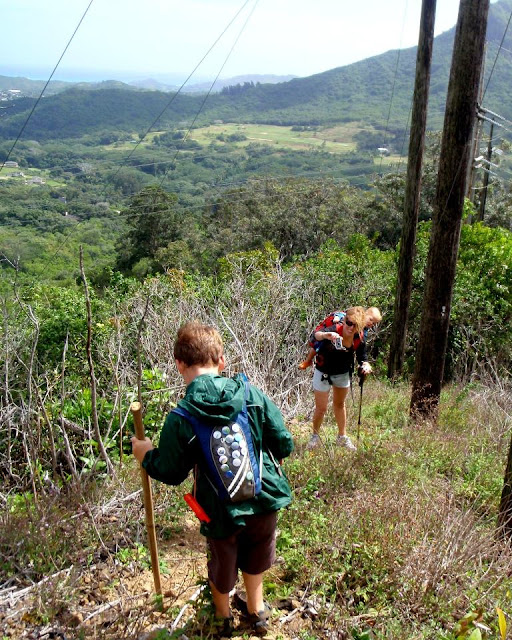 Heading back down to a snack, and mop up running noses. 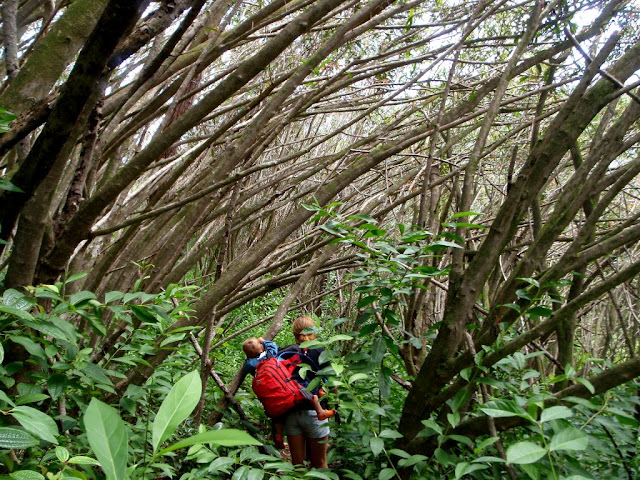 I liked the way these trees leaned over our trail, and Ben loves to touch tree trunks, and hold a flower or baby fern. 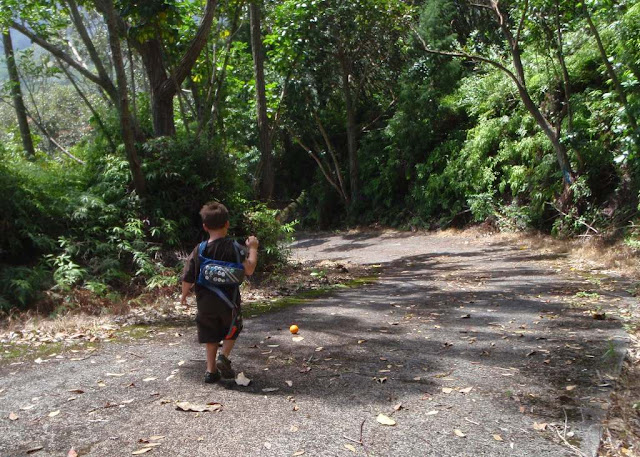 There we were, sitting down to a little snack, and an orange made a run for it!!  It was so funny to sit there and watch this runaway orange!  After capturing it, Sam gave it another roll to test out the banking of the old paved road between the water tower and the local homes below. 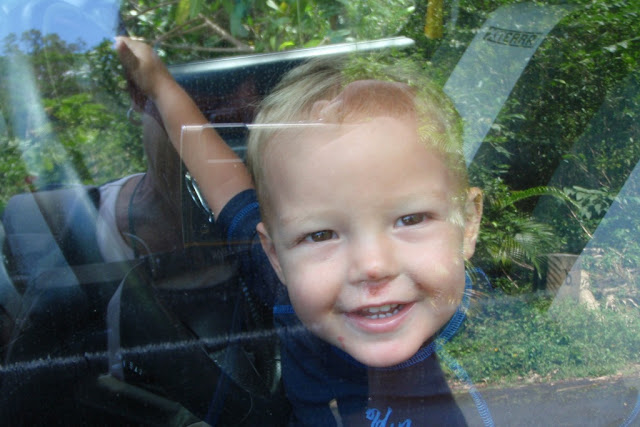 "Ben want dwive, Gwamma; Ben want dwive?"  So, while Alli packs up the truck, Ben gets to sit in the "dwiver's" seat just happy as can be!  That little tyke has had drool coming out his nose for days, AND it runs on a nasty scrape he acquired while running on macadam a few days ago (on my watch - aaaarrrrggg).  He face-planted with a thud, getting a bang on his noggin, a bloody scrape on his nose, and the one above his upper lip.  I sent his mommy a cellphone picture of him so she wouldn't be totally shocked when she saw him.  Like his big brother, he is an absolute gem! 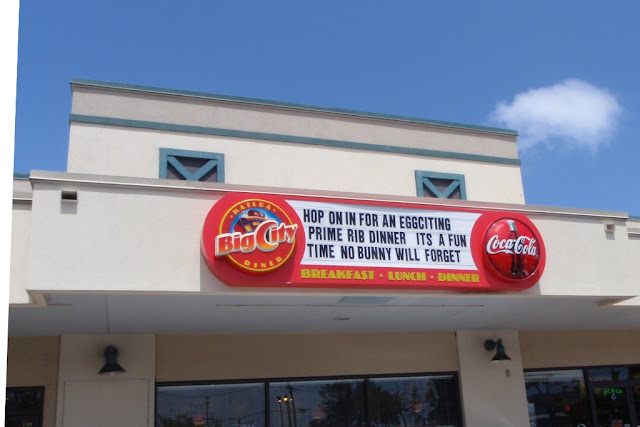 What a way to wrap up the morning -- at Big City Diner where Richard was more than happy to meet us!  Thanks again, Alli, for another memorable day.
Posted by Oli at 1:32 AM